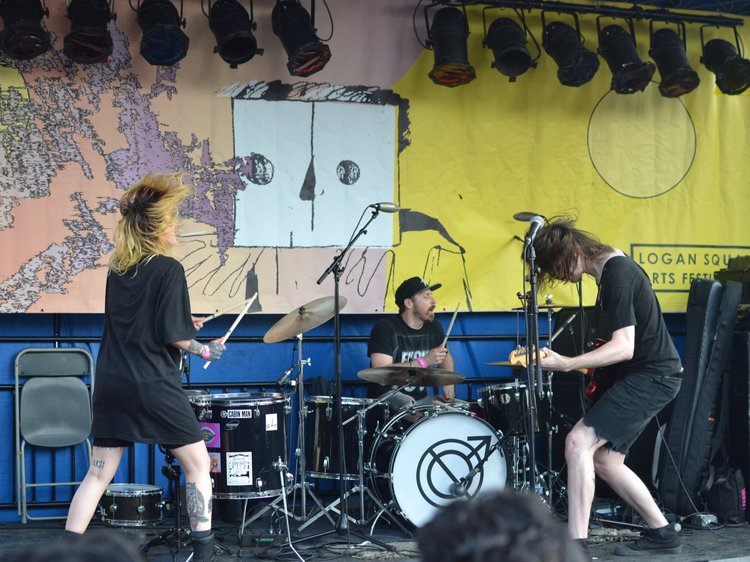 Street fests in the city don’t have much edge. It’s pretty rare to encounter a band that gives you something to think about or who use the platform they are afforded to make a timely statement about the state of the world. A lot of bands on Saturday sounded like they were auditioning for car commercials. No Men, on the other hand, took the stage wearing black t-shirts spray-painted with “F*ck ICE.” (Because seriously, f*ck ICE.) No Men blasted through most of their one and only album, Dear God, Bring the Doom and the 2017 single Cut, tearing a hole through the eye of the festival with the gnash of growling post-hardcore guitar swipes, the impatient roll of concussive rock rhythms, and the biting, icy-heat of Pursley’s indignant, polymorphous howl. I haven’t seen them in over a year, and it is refreshing to know that they can still rip the face off a place to expose the steaming, obsidian homologous that writhes below its surface. Dwelling on the overcharged angst of their set and witnessing their blunt condemnations of our nation’s deeply ugly and inexcusable immigration policies, both in their between-song banter and their wardrobe selection were what that afternoon needed. A dose of dark reality in a rapidly gentrifying area, now a magnet for opulence in a segregated metropolitan area, within a nation that is openly hostile toward vulnerable people both inside and outside its borders. “Hell is real, I’ve seen evil, Now I know the truth.” (words by MDR, read review here)