NO MEN REVIEWED IN PUNKNEWS.ORG 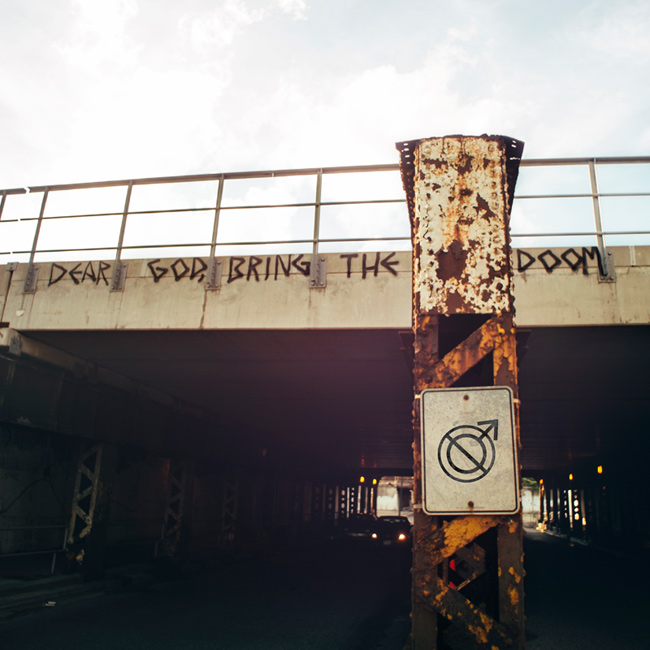 Dear God Bring the Doom by No Men is exemplary of the budding femme punk scene revival in Chicago. The band itself is femme fronted, dual drummed and is comprised of a talented 3-some originally hailing from Texas.

The band’s composition lends itself to driving beats and melodic vocals, all of which are tastefully explored throughout the album. A lost art among many, this album progresses along a clear journey. The first track, “Mean Girl”, starts with a playful driving tone, which is closely mirrored into the second track “W.A.B.D.M.Y.C.” (wearing all black doesn’t make you cool). The playful pop tones smoothly decay into a gritty, noisy melody. As the album progresses the noise is more chaotic and explorative with less clean drum beats and more wandering low, sultry vocals. This tone reaches a pitch by the 5th track, “Deeper”, which is decidedly slower and more vocally focused. From there the album sling shots into the other direction with tracks like “Hell is Real” and “Model Citizen” which reach a pitch in yelled vocals and fast, driving dual-drums.

To mirror the musical arc of the album, the content of the lyrics and tone follow a similar wave. The initial tracks are lighthearted in nature – best exemplified in “W.A.B.D.M.Y.C.” – a song dedicated to telling people “wearing all black doesn’t make you cool, but it probably doesn’t hurt”. These songs progress to the slower, more intentional tracks like “Brut” with lines such as “prison cells/who are these animals/that live inside such different skin”. Until the album finally reaches a pitch in the yelled “blood on your hands/ it’s mine/ no men”.

Dear God Bring the Doom is a must listen to album for any Chicago punk enthusiast. It takes you on a journey with a leading hand through the music and content to have an honest to God feeling about music again.